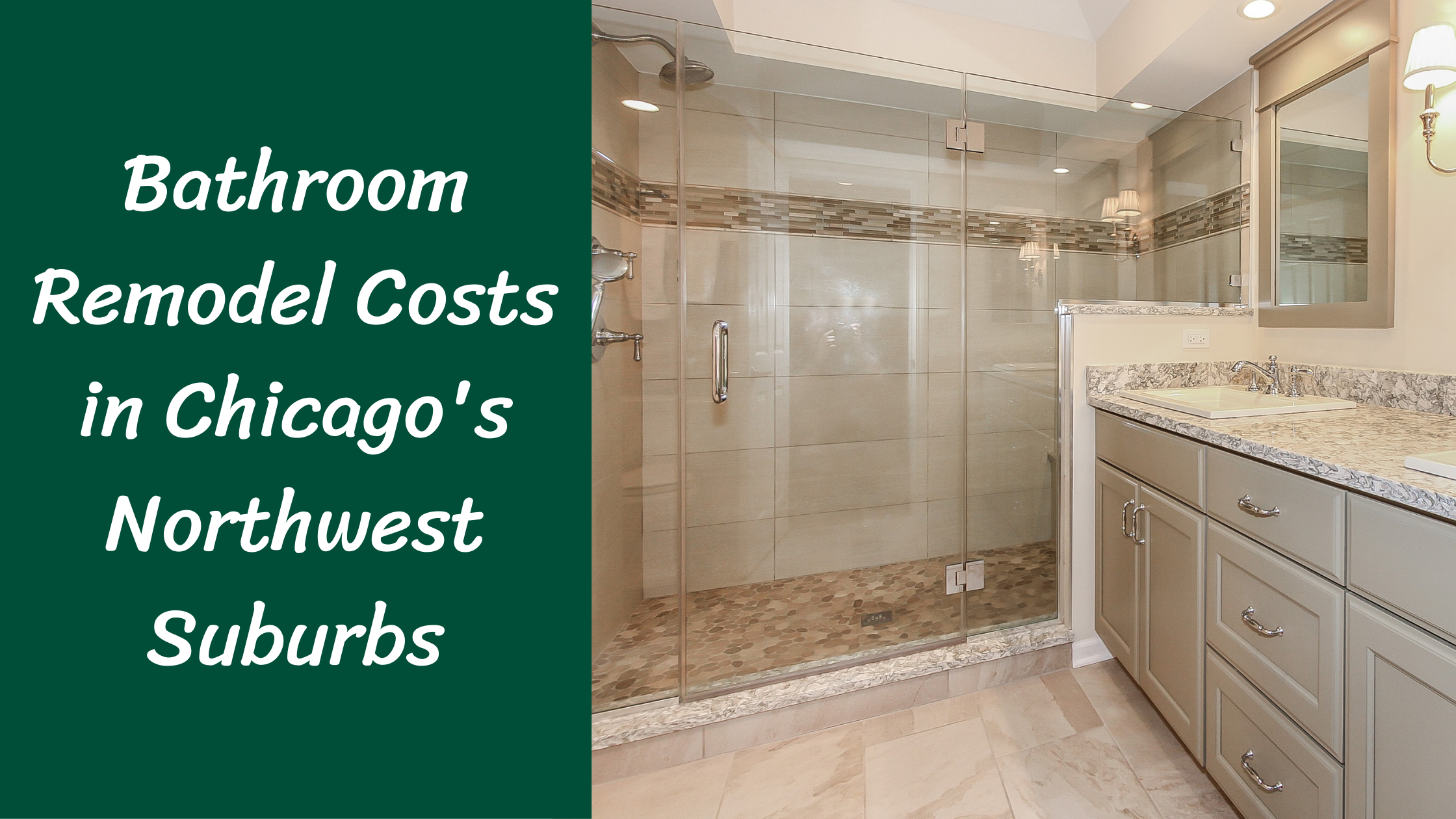 How Much Does a Bathroom Remodel Cost in Chicago’s Northwest Suburbs? [2022]

When it comes to design build remodels for your bathroom, there’s no one-size-fits-all guide to costs. That’s because the design build model is inherently focused on customization, differentiation, and, above all, an aesthetically beautiful result tailored to the home owner’s personal tastes and needs. As always, the surest way to prepare your budget for your own remodel is to discuss your project with your remodeler.

That being said, every remodel begins with preliminary cost research, and the bathroom is no different. To help you prepare for your initial consultation, we’ve compiled information representing the average costs of bathroom remodels in Chicago’s Northwest suburbs by neighborhood.

Remodeling costs also vary by neighborhood. Known for its beautiful bodies of water like Lake Arlington, Arlington Heights is located about 25 miles northwest of Chicago’s downtown. In Arlington Heights neighborhoods like Scarsdale, Stonegate, and Shorewood, the average bathroom remodel costs between $30k and $80k.

Located 40 miles northwest of Chicago, Barrington is a historic suburb with schools that rank among the top in the state. It also has a thriving village center that is surrounded by Illinois’ largest residential historic district. In Barrington’s neighborhoods, including North Fox Point, South Fox Point, and Barrington Village, the average cost for bathroom remodels ranges from $30k to $120k.

Barrington Hills is also situated about 40 miles northwest of Chicago. Many Barrington properties span one to ten acres or more, and the suburb has a reputation for offering the best of country living alongside city conveniences. Residents enjoy a local forest preserve that measures over 4,722 acres. Barrington Hills’ costs for bathroom remodels are similar to those above, ranging from $35-120k.

Deerfield, an important business area that is home to the headquarters of corporations in diverse verticals, is located approximately 25 miles north of Chicago. For Deerfield, the average bathroom remodel costs between $35k and $100k.

Glenview is located about 15 miles northwest of the Chicago Loop and is bordered by Flick Park, Camp Pine Woods, and The Grove nature preserve. Like Deerfield, Glenview is a hub for several large businesses. Neighborhoods like The Glen in Glenview have a ballpark bathroom remodel cost of $45-90k.

Inverness is located about 29 miles northwest of Chicago and is known for its prioritization of natural areas. In fact, Inverness has only one business district. In areas like the Shires of Inverness, the average cost of bathroom remodels is between $30k and $120k.

Kildeer is also located about 29 miles northwest of Chicago, and it preserves a quaint, close-to-nature vibe, perhaps because it was originally made up of farms. Today, it still has several dedicated natural areas. The average home bathroom remodel cost in Kildeer ranges from $30k to $100k.

Lake Barrington is known for its outdoor recreation opportunities, open spaces, and scenic vistas, made all the more beautiful by the presence of Lake Barrington itself. In neighborhoods like Lake Barrington Shores, the average bathroom remodel costs $35-90k.

Lincolnshire is a popular destination for families, as it offers direct access to I-94 for a quick commute to Chicago as well as an award-winning public school district. For Lincolnshire, the average bathroom remodel ranges from $35-100k.

Distinguished as the first historic district in Illinois, Long Grove is a charming suburb with a beautiful downtown area filled with shops, restaurants, and more. In Long Grove neighborhoods like Royal Melbourne, the average bathroom remodel costs between $35k and $120k.

Mount Prospect has some of the lowest crime rates in the nation. Just 4 miles north of Chicago O’Hare International Airport, this suburb makes it easy to travel anywhere in the U.S., abroad, or simply to Chicago itself, which is just 20 miles away. For Mount Prospect, the average bathroom remodel costs between $30k and $80k.

Home to country clubs and a Jack Nicklaus golf course, North Barrington is a suburb with a small and close-knit community. North Barrington neighborhoods like Wynstone and Timberlake have an average bathroom remodel cost that lands between $35k and $120k.

Northfield is a popular spot for families. Niche ranks Northfield A+ overall, A+ for public schools, and A+ for families. Its proximity to downtown Chicago is another selling point. In Northfield, the average bathroom remodel cost falls between $35k and $120k.

Palatine is the 18th largest community in Illinois and was founded in 1866. In the neighborhoods of Palatine, including Plum Grove Estates and Auburn Woods, bathroom remodels typically cost $30-80k.

Located on the shores of the Des Plaines River, Riverwoods is known as one of the best places to retire in Illinois. In Riverwoods, the average bathroom remodel costs between $40k and $130k.

South Barrington is a charming destination for shopping, fine dining, and entertainment, and its neighborhoods are home to some of Illinois’ largest estates. For South Barrington, the average bathroom remodel ranges from $35-130k.

Of course, the cost of your own remodel depends on your particular vision for the project, its scope, and its size. Your design-build remodeler can better help you estimate the cost if you take a little time to gather inspiration and set an overall vision. While there are many great resources available online, one helpful way to visualize options for your end goal is to view pictures of previous remodeling projects completed by your contractor.

For many Chicago-area residents, bathroom remodels are just one stage of other popular home renovation projects like kitchen upgrades or whole home remodels. If you would like to view average, neighborhood-specific costs for whole home remodels and kitchen remodels, you can find the information you are looking for by downloading the premium guide below.

This article uses data from the most recent Remodeling Cost vs. Value report which pulls averages from 2020. Due to unprecedented market volatility and supply chain irregularities last year, residential construction prices in Chicago have increased up to 25% for some projects. Have a discussion with an experienced builder to know the most accurate and up-to-date building cost estimates. Now it's more important than ever to hire a professional contractor with longstanding supply and labor relationships. 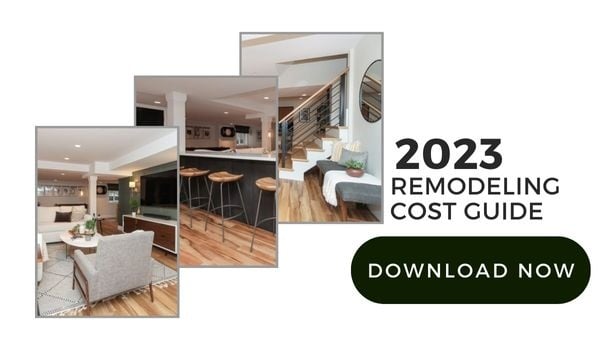 Patrick A. Finn, Ltd is a fantastic company to work with if you are considering remodeling your home or building a new home. His team is very professional and knowledgeable and produce high quality work. They are truly expert craftsman. Patrick worked with us himself, in order to provide us with the results that we…